I'm excited to share that my story "None So Blind" is in the new Sci-fi Anthology "Broken Bones & Ten Dollar Bills"; a collection that explores our relationship with technology and how that defines us.
Now available for pre-order!

The Foundling by Charlotte Bronte

Summary:  Edward Sydney is discovered as a baby in a garden hedge.  He is taken under the wing of a local gentleman, Mr Hasleden, and grows up believing that Haslenden is his father.  Only after Haslenden’s death does he discover the truth of his childhood.  No one knows where he is really from; his only clue is a rich brooch that was found with him in his basket.
Determined to seek his fortune, he sets forth to Verdopolis, a city in Africa known for its wealth and power.  There he meets the Marquis of Douro and through his influence becomes a prominent member of the city in the hope that he will be able to discover his heritage.

About the book: Written when she was 17, the Foundling is set in the fictional African city of Verdopolis (also known as Glass Town). It was a setting that was common to the Bronte siblings, in which they would write tales for each other using characters that were based a set of toy soldiers.


(Spoiler warning!  Although I've tried to keep the following mostly spoiler free, for the sake of discussion some plot points are revealed!)

This is a weird book.  You can look at it in one of two ways; as a story on its own merits, or as glimpse into a history.

I’m going to admit – despite being aware of the Bronte’s works I’ve never read any of them before.  I have  a “backlist” of classics that I dip into between my fantasy and sci-fi reads, but I’ve not made it as far as having a look at Jane Eyre or Wuthering Heights… so when someone recommended the Foundling as a fantasy I was excited and interested.  I’d get to read a classic author writing in a genre I love.

And here’s the bizarre thing; it is a fantasy… but that’s entirely incidental.  The story is actually about this young man’s place in society.  The characters are fine, and the setting is interesting enough, but any magic comes in the form of deus ex machina; literally.  How so?  Well the Bronte siblings actually appear as characters in the book; the all powerful genii, and use their God like powers to change the outcome of the character’s actions.

As such, as a tale, it feels entirely pointless.  The mystery set up – who is Sydney really?  Is easily solved without any struggle.  (Someone just tells him in the end).  The circumstances of him ending up in a hedge as a baby is a strange and magical tale, but again, he must do nothing to discover this; it’s just explained in the same part of the telling.  There are no consequences to the villain’s actions, with the genii undoing that plot and forbidding any retribution or revenge upon them.

Although it’s interesting to see the city as Sydney arrives, he is whisked away from the every day and we don’t really get to learn how Verdopolis works or why the people there hold such strange attitudes.  (It does not worry them at all to see children burned alive… and as suddenly as this is revealed to Sydney’s horror, he seems to forget about it very quickly as this is never brought up or mentioned again.)  Sydney’s attitude towards people switches in an instant, as does, it seems, the city residents thoughts towards him, from dislike to respect to friendship, with little reason.

From storytelling games with my siblings I can say that we would discuss stories around writing them down, or write silly things that were jokes for our own amusement.  Maybe the genii appearing and fixing everything came as a reference to a conversation they’d had, or just to please a younger sibling by portraying them with great power to rescue their favourite characters from doom?
And this is what makes the book interesting.  You get a glimpse into the imagination of a young Victorian family’s games and imaginations, as well as seeing a “practise” for their future works.  The writing is good, with great imagery and imaginative characters.  So, for all I found the tale lacking, I have to forgive it on the grounds that it was never meant for me; I get the feeling that if it had been, it wouldn’t have lacked those plot points and explanations to round it out.  Not to mention, the writing is still excellent, anyway.

I’d say that if you’re looking for a standalone fairytale or fantasy story, this isn’t it, and you’ll be disappointed.  However as a piece of history it is a fascinating work, and I could imagine for any Bronte fans it would be of great interest to see this early piece of Charlotte’s writing.

Some interesting snippets of history: http://www.coombeabbey.com/5-mediaeval-customs-you-didnt-know-existed/
Posted by Sarah at 06:24 No comments:

Well, that's another five submissions sent off... I've made an excel sheet now so I can keep track of who I've submitted to so that I don't accidentally send them my book more than once.
Fingers crossed for some nice replies!
Posted by Sarah at 10:10 No comments:

Email ThisBlogThis!Share to TwitterShare to FacebookShare to Pinterest
Labels: Update

A work of art is never finished...

I heard it said once that "a work of art is never finished, only abandoned."

I've lost count of what draft I'm on now.  Mostly because redrafting doesn't involve a neat start to finish read through improving as you go along.  It involves realising you can improve this part - but if you do, that bit back there needs a change and, oh, while I'm there I'll just improve this...

So I decided it would be a good idea to print out my novel and read through it front to back on paper.  For one thing it's easier that reading on a screen, and for another it allows me to make notes on things without getting distracted by rewriting there and then.

To save paper, I figured I would print both sides of the page.  Well, that turned into a nightmare!  After managing to put the paper back in the wrong way around, having the printer spurt a nice chunk of it onto the floor and mix the pages up, and then running out of ink three quarters of the way through printing, I finally have a paper draft in my hands!

Some bits are getting a touch up.  More than I expected is being left alone.  Maybe after this one it's time to abandon it to the wild... 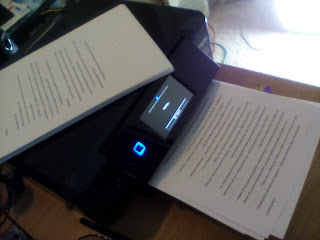 Interesting discoveries, which will lead to interesting new inventions.  It's amazing how inspiring a dark streak on Mars could be:  The possibility of alien life, new robots which have greater precision and accuracy... humans visiting our red neighbour... and from there?
Maybe some dark streaks have kickstarted the possibility of our interstellar civilisation! :)

Email ThisBlogThis!Share to TwitterShare to FacebookShare to Pinterest
Labels: inspiration

I can hear the wind turbines thumping.  Thrum.  Thrum.  Thrum.  Day and night they turn.  Sometimes I imagine what they look like, picturing them just on the other side of my wall; the blades sweeping past just centimetres from my ear.  Sometimes I think they’re far away; barely seen ghosts, hazy through the clouds which cling to a distant hilltop.
The thumping rhythm has driven more than one person mad.  I hear them screaming for the turbines to stop; pleading to be taken away.  But not me; for me they are the only thing keeping me sane.
My world is rust-streaked concrete, congealed cold porridge and a single buzzing light which flickers but refuses to ever go out.  The wind turbines are the only thing that I know exists beyond these walls.  If ever they stopped, would I even believe that there is an outside?


I’ll see them one day.  I’ll count the pillars, feel the air brushing past my skin.  But for now all I can do is close my eyes and listen to them turn.
Posted by Sarah at 08:42 No comments: